Create an Account - Increase your productivity, customize your experience, and engage in information you care about.


Bosco is a pure-bred German Shepard, who flew to MN from Europe. K9 Bosco and his handler, Officer Andrew Lehmkuhl, started a 15 week training program to be certified by the USPCA in March 2022. Once completed they will be trained in the apprehension of violent offenders, tracking of suspects, locating of narcotics and community engagement.

Parker is a German Shepherd. He was adopted in January 2016 at the age of 1 year. He worked in Waite Park until May of 2019 when he was assigned to a K9 handler with the St Cloud Police Department.


Kato is a German Shepherd from the Czech Republic. Kato, who is 7 years old, was retired in January 2016. Kato started to have problems with his hip that forced him into retirement. After retirement he will be spending his days, living the good life, in the home of a local police officer.


Dino began working with the Waite Park Police Dept in October 2007.Dino was born in the Czech Republic and came to Minnesota in 2003. He was trained to locate narcotics, articles, suspects and missing persons. He was a great K9 and loved the police work he did. Dino retired in December 2013. In 2016, Dino became sick and passed away.


Many of the K9s and their partners have performed dangerous apprehensions, building searches and searches for narcotics. Some of the K9s have been recognized for their outstanding performance at K9 trials on a state or national level.

In 1993, K9 Toby received the Medal of Valor for his performance in apprehending a dangerous felon. His actions helped to keep the officers involved safe.

Interested in Donating to the Waite Park K9 Program? Click below to find out how you can help!

Check out some local articles discussing our K9 program. 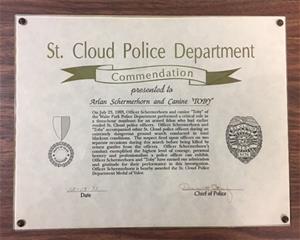